The former Greek Minister recounts how her time at Yale laid the groundwork for a career dedicated to sustainable development and policymaking in the public interest.

“Integrity over expediency”: Louka Katseli on her years at Yale and the path to international policymaking 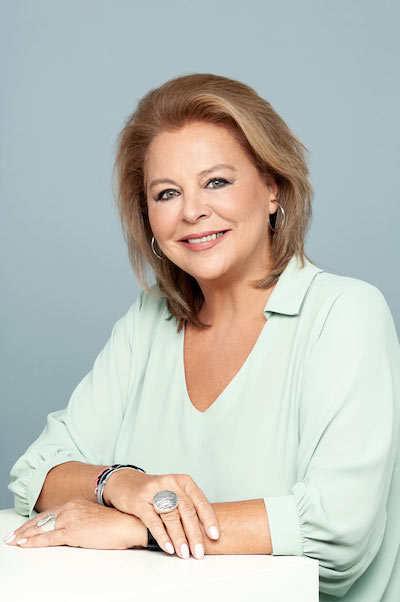 Louka Katseli lives by two credos. The first is “make an imprint,” and the Greek economist-cum-policymaker has indeed made her mark – on the students she has taught, as well as on policy. Greece’s first insolvency law, passed to protect borrowers during the debt crisis, bears her name.

The second is “choose integrity over expediency.” Acting on this credo not only built her reputation as a staunch advocate of human rights and sustainable development, but also won her the distinction of being cast out of her own caucus in the Greek parliament not once, but twice.

In an interview with EGC, Katseli detailed how her early career at Yale helped her formulate the principles that would guide her through positions at the OECD Development Center, the United Nations, and the Greek Cabinet – and her work in protecting property rights and advocacy today.

Katseli’s first love was theater. The daughter of a well-known theater director and Greek actress, she commenced her undergraduate studies at Smith College in Massachusetts intending to major in English. Yet under America’s liberal arts system, she found herself gravitating toward the social sciences. Economics, in particular, fed her interest in policy and helped her make sense of her upbringing under a far-right military dictatorship in Greece. Katseli graduated in 1972 with an economics major and theater minor.

Greece’s authoritarian regime fell in 1974, by which time Katseli was starting her PhD in Economics at Princeton University, having just completed her MPA in public policy and development economics at Princeton School of  International and Public Affairs. A recipient of an award for her “Outstanding PhD Dissertation”, Katseli joined the Economics Department at Yale as an assistant professor in 1977, together with Paul Krugman who would go on to win the Nobel Prize in economics in 2008.

Katseli was drawn to Yale’s strengths in international and development economics, having long admired EGC affiliates such as T.N. Srinivasan, Carlos Diaz-Alejandro, and Hugh Patrick. EGC was, in the early 1980s, a locus of research on topics ranging from agricultural transformation to debt, exchange rate policy to trade, foreign investment to migration. Some of these themes aligned with Katseli’s own research, which concerned the transmission of inflation to small open economies and trade-migration-investment interdependencies. Her work while at EGC informed discussions of one of the most pressing macroeconomic conundrums of the day: stagflation, a grim combination of surging inflation, high unemployment, and anemic growth.

The outstanding lives and careers of women who helped found EGC and demanded greater equality in the profession – as well as early female faculty members at EGC and Yale Economics.READ THE SERIES

Research was often a joint effort for Katseli, who struck up fruitful exchanges with a wide range of economists during her time at Yale. She collaborated with Diaz-Alejandro and Srinivasan, whom she came to see not only as colleagues, but also friends and role models. Katseli frequently exchanged ideas with academics beyond New Haven, most notably Jagdish Bhagwati and Ronald Findlay at Columbia, and Joseph Stiglitz at Princeton and co-authored papers with William Branson at Princeton, and Nancy Marion at Dartmouth.

“My time at EGC was formative because I was surrounded by people who not only had strong theoretical foundations, but also a wealth of practical experience and policy insight,” Katseli recounted. “At EGC, we studied development not only as an intellectual exercise, but also to create an impact. I’ve maintained this focus on social impact throughout my professional life, and for it I owe much to the people at EGC.”

Nancy Marion – former Princeton classmate, Dartmouth professor and fellow international economist – recalls their early days in academia fondly.  “We both studied public policy at Princeton, went on to earn PhDs in economics with a focus on international topics, and accepted academic jobs at Ivy League schools,” she said. “At that time, we were the only women in the international finance and macroeconomics group at the National Bureau of Economic Research.” She attests to Louka’s “amazing ability to bring her knowledge of economics, open-economy macro and development to high-level discussions with policymakers and see possible ways forward,” both then and now.

Katseli found tremendous joy in teaching, though, to her chagrin, her first class on international trade comprised two women and 125 men. She taught the course for the rest of her tenure at Yale, with later runs achieving gender parity and reaffirming her conviction in the importance of female academic role models. Her dedication to teaching and research earned her a Best Young Professor Award in 1980, and a promotion to associate professor in 1982.

During her two decades in America, Katseli observed Greece’s democratic transition and consolidation unfold steadily. However, the damage of seven years of venal military rule and profligate economic policy had already been done, and its blight on the economy was proving difficult to undo. In 1982, Prime Minister of Greece Andreas Papandreou asked her to run the Center of Planning and Economic Research (KEPE). She took a leave of absence to serve temporarily, then in 1985, after a solemn consultation with Srinivasan, decided to leave Yale without the safeguard of a permanent academic appointment to fulfill her abiding desire to serve her country. She was elected Professor of Economics at the University of Athens in 1987, serving for a number of years as Chair.

Following her time at KEPE (1982-1986), her interest in public policy and sustainable development led her through a range of positions in policy, including as member of the European Commission’s Monetary Policy and Economic Policy Groups, economic advisor to the Prime Minister of Greece, Vice-Chair of the United Nations Committee for Development Policy, member of the Comité des Sages for the Reform of the European Social Charter and Director of the OECD Development Center in Paris.

In 2007, Katseli entered politics as part of the social-democratic Panhellenic Socialist Movement (PASOK), passing from elected Member of Parliament to Minister of Economy, Competitiveness and Shipping, and then Minister for Labour and Social Security.

A virtual series that convenes economists, historians, journalists, and policymakers to apply insights from history and economics to the most pressing policy issues confronting developing countries.VISIT THE SERIES HOMEPAGEWATCH THE DIALOGUES

Financial crisis erupted in Greece in 2009. At this time, her name became associated with a number of regulatory reforms to promote investment and social entrepreneurship, as well as labor-market reforms intended to enhance flexibility with protection of collective agreements. In 2010, she was the architect of the “Katseli Law”: Greece’s first personal insolvency law, which furnished protection to primary residences and allowed, via court decisions, mortgage debt to be written down and rescheduled. The Katseli law restored the purchasing power of vulnerable debtors, provided creditors with the means to claw back part of their loans and protect their primary residence, and palliated the Greek economy. “To promote progressive reforms at a time of harsh austerity was a major challenge,” Katseli said. “I became wiser, more resilient and committed in the process.”

Katseli’s academic background provided her with valuable knowledge and insights into policy making. She traces her savvy for debt restructuring policy back to spirited discussions at EGC with Diaz-Alejandro, who had taken up the topic in the 1970s. Additionally, her tenured professorship at the University of Athens allowed her to vote by her conscience in Parliament, untrammeled by the careerist motives that guided other politicians. She refused to back programs advanced by Greece’s creditors and accepted by her Government, involving the dismantling of collective agreements; in return for her principled voting, she was removed from PASOK’s parliamentary group. In 2012, Katseli encountered crisis again when she objected to confiscation of Greek assets in case of non-payment of a tranche under Greece’s second bailout package with the Troika: the decision group formed by the European Commission, European Central Bank, and International Monetary Fund. She was removed from PASOK’s parliament group a second time. In collaboration with seven former PASOK parliament members, she then proceeded to found and head a new party, the Social Pact, which ran for election in May 2012.

“My time at EGC was formative because I was surrounded by people who not only had strong theoretical foundations, but also a wealth of practical experience and policy insight.” – Louka Katseli

In 2015, Katseli became Chair of the National Bank of Greece and Chair of the Hellenic Bank Association: the first woman ever to hold these positions. In the months following, Katseli faced a new upheaval which she had to manage over the imposition of capital controls that led to a widespread restructuring of bank procedures and the recapitalization of all Greek banks.

Costas Meghir, Douglas A Warner III Professor of Economics at Yale and an EGC affiliate, said, “Louka Katseli has been a trailblazer for women in policy and together with a small group of prominent women has helped open doors to a more inclusive political scene in Greece, which continues to be heavily male dominated.”

Today, Katseli is taking her experience at the front lines of policy to a wide range of institutions. Her recent achievements include co-chairing the Independent Commission for Sustainable Equality alongside ex-Prime Minister of Denmark Poul Nyrup Rasmussen, a commission set up by the Progressive Alliance of Socialists and Democrats Group in the European Parliament to create tangible measures which promote sustainable equality and well-being in Europe. She continues to advance capacity-building and sustainable development in frontier economies as Vice-Chair of the Executive Board of the African Capacity Building Foundation and as a founding partner of Match2Invest, a boutique consultancy that unblocks investments and promotes sustainability in Greece. Until recently, she served as the Chair of the Board of Directors of the National Bank of Greece in Cyprus and serves today as head of the Audit Committee of the Bank. Her love of the performing arts continues in her role as the CEO of Music Works Rightholders’ Cooperative Edem, an organization that champions the rights of Greek music composers and promotes Greek music creation.

In keeping with her past work at the EGC, Katseli believes the global development community’s top priority should be to revamp global governance “The post-Bretton Woods institutions are not in a position to manage the global community effectively as they were set up to be strictly intergovernmental. Power has shifted to major corporations: just 140 corporations control more than 80% of world transactions. Global governance reform is needed to more effectively regulate the dominant players and mitigate recurrent global crises, such as the global financial crisis, the migration and asylum crisis, the Covid-19 pandemic, and the climate crisis.”
She noted that national governments are increasingly unable to safeguard human security and promote policies for the well-being of their citizens, and citizens are losing trust in them in turn. “Global governance reform is urgently needed to safeguard democracy,” she said.

Valerie Chuang is a master’s student in International and Development Economics at Yale. All photos courtesy Louka Katseli. 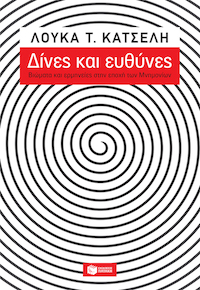 Katseli’s book, provisionally titled “Steering through the storms: A personal account,“ is expected to be published in English  in 2023.  A Greek edition, published in 2020, offered an insider’s view on the causes and evolution of the financial crisis and the mistakes of Greek policymaking, and  a severe critique of the austerity measures imposed by the Troika. Katseli draws from her breadth of experience to comment upon the workings of European institutions, the interplay between public- and private- sector interests, and the role of institutions and political leadership in tackling crises, with a view towards policy lessons for the future.