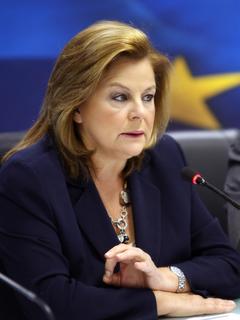 FOR LOUKA Katseli, the brouhaha over George Papandreou seeking aid

from the International Monetary Fund in December 2009 is much ado

about nothing – it was, after all, the Princeton-trained economics

professor who, as development minister, told journalists that going to

the IMF was well nigh inevitable.

An economic realist who by all accounts has managed to preserve

interview with the Athens News, insisted that structural reforms must

“The most important decision is the possibility that the EU support

[European Stability Mechanism] could lend to Greece directly through

the purchase of [new] sovereign debt. This is extremely important for

private markets. It provides a different option for lending to member

states if market conditions are not suitable,” Katseli said.

swaps] pricing – in terms of lending to sovereign states. Now, the

possibility of a European fund purchasing sovereign debt, together

fully, opens up the market. It will influence positively market

conditions for countries such as Greece,” she said.

mechanism purchase sovereign debt in the secondary market. “My sense

is that this decision will not be taken by the end of March,” Katseli

said, though she did not rule out the EU move happening by the March

With the aid of its eurozone partners, Greece can create the

Greece to return to the markets.

“The decision to utilise state property reduces the debt burden and

allows Greece to repurchase its debt,” the minister said. “The EFSF

being able to purchase sovereign debt in the primary market, and

eventually in the secondary market, will also calm private markets and

allow Greece to enter the market.”

programme is unrealistic in terms of attaining the targeted amount,

coin is the banking crisis. Banks and financial institutions that hold

up. There are risks on both sides, and both have incentives to find a

solution with mutual payoffs. Raising funding through privatisation is

a win-win deal. The banking system has every incentive to exchange

about growth prospects. Talk of one-stop shopping for business

startups, since the time Pasok was main opposition, is still just that

reform, even if we have two-to-three month delays in each step.

Regulatory reform and the new funds [to bolster business] will be

May, and a one-stop-shop registry that was due in October 2010 was

delayed by the autumn cabinet shuffle and is now expected by May.

elected is, for Katseli, a storm in a teapot.

“European governments are not outside the global architecture for

lending of last resort. The euro came into being in 2002, but the

eurozone had not provided for a lender of last resort. For all of us

who were in the debate beforehand, this was always an issue since the

inception of the eurozone,” she said.

“If the European Central Bank was unwilling to play the role, it was

clear the IMF would,” Katseli added. “When the crisis came, it was

only natural for the IMF to step in. Now we need to develop European

Does the bitterly divisive rhetoric of Papandreou and New Democracy

route to the memorandum. This is an irresponsible position,” Katseli

said. “I sincerely don’t think we had an option other than signing. It

is vexing for the premier, after a good outcome on March 11, for the

main opposition to start putting caveats on a good decision.”

‘I would apologise to pensioners’

THE ATTACK on labour rights through the EU-IMF memorandum, the

battering of collective bargaining rights and the slashing of salaries

and pensions in the public sector have all cost Pasok in the polls.

And though Louka Katseli largely defends the government’s moves, the

“I would apologise to pensioners,” Katseli said when the Athens News

asked her whether Pasok should apologise for any of its actions. “The

cut funds should be reinstituted as soon as possible. You can

apologise for any delays, and for not explaining to people what you’re

doing. I would not, however, apologise for structural measures that

have been taken that were in our programme.”

that were hard-won over decades, Katseli disagreed. “There has been no

battering of collective rights,” she said. “According to the law,

individual business contracts in the private sector are collective

bargaining agreements. We had dialogue with our social partners and

negotiate wage cuts with staff. If there is an organised labour union

at the firm level, representatives may negotiate with the owners. If

not, the branch unions or the confederation of labour speaks for the

of weakness, to say the least.

“There is always an asymmetry between employer and employee but that

asymmetry is witnessed every day in the market through private,

individual contracts,” she replied. “For the first time in the Greek

legal framework this law introduces the possibility of more

flexibility through collective bargaining. That’s why all social

partners agreed to go along.”

Katseli denied New Democracy’s charges that the government, by

implementing a means test, will vastly cut the percentage of

unemployed entitled to the 430-euro-a-month benefit. The government

will be found elsewhere.

children because they earn above a certain income.