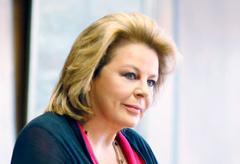 Κυριακή 27 Νοεμβρίου 2011 / What Louka Katseli and Premier Lucas Papademos have in common is a distinguished academic background, which, along with their longstanding acquaintance, gives her keen insight into both the challenges faced by the premier and his capacity to handle them.

A former economics professor at Yale and the University of Athens, Katseli was an economics advisor to the late premier Andreas Papandreou and has served as director of the OECD Development Centre in Paris.
“I have no doubt [Papademos] will do a superb job in completing negotiations with the EU and fulfilling the obligations of the October 26-27 [bailout] package,” Katseli, Pasok deputy and former labour minister, told this newspaper.
The other key task is presenting the Greek people with a credible roadmap for what to expect in the 2012-2014 period. “The government needs to manage expectations, given the limited capacity that Greek families have to pay increased taxes, when incomes are reduced,” she underlined.
That task may be harder for a technocrat who all his life has dealt with monetary policy in the sanctuaries of academia and central banks, even one who is “very serious, composed, credible and professional”, as she described the new premier. “He projects security.”
She also believes there may be some room in the new bailout deal – expected to be signed by the end of the year – to make life a bit easier for the middle class, including adjustments in taxes and state expenditures over time.
“Choices can be made in the new memorandum to distribute the burden of adjustment differently,” she said. Referring to a recent and controversial raise in VAT on food businesses, she noted: “The 23 percent VAT tax on restaurants and other categories can be lowered if we go much faster on cutting down expenditures.”
Papademos will decide the overall framework of economic policy, and Finance Minister Evangelos Venizelos will implement it while supervising tax authorities and the overall budget.
Katseli expects the new memorandum to be based on the medium-term plan passed in July, on the recent law deregulating labour relations (she voted down that article and was expelled from Pasok only to be reinstated when she supported former prime minister George Papandreou’s in a November 4 confidence vote) and on possible new measures to correct deviations from 2011-2012 targets.
And she counters the charges that Greece cooked the books to enter the euro when Papademos was governor of the Greek central bank, maintaining that there was no fiddling with numbers. “There are different ways of treating military expenditures and central government expenditures, and Greece’s procedure was similar to that of other governments at the time,” Katseli said. The way the numbers were presented “was in accordance with the rules of Eurostat, and with its blessing”.
As for the direct role of the parties that are coalition partners in the new government – Pasok, New Democracy (ND) and Laos – the former labour minister thinks the government will “supersede the big parties” with an “overall framework that will be independent of them”.
Share